The XO Files Part II: The New 4PC Market, and its Failings

This entry is part two in the series, "The XO Files: I Want to Believe in the XO" Read Part I about the Laptop Project / Education Project disconnect here.

Part II: The New 4PC Market, and its Failings

The XO Files: I Want To Believe

The OLPC XO is a path-breaking, jaw-dropping piece of technology. And not just any traditional, consumer-focused (faster, shinier) way, but in specific and strategic areas that make the laptop perfect for developing world situations where it might be damp or dusty, the sun might be your light source at school, and you probably don't have reliable electricity at home. It happens to be that those same constraints also produce technological solutions that make the XO attractive to a certain set of users who want a no-frills, but highly functional laptop (like world travelers), as I mentioned in Part I -- it's lightweight, rugged, and low-power (solar chargeable), but powerful enough to connect to faint wifi, play movies, or review digital photos.

These features come with drawbacks - the long battery life required a processor that's simply not as fast as common laptop processors. The cost constraints meant a smaller screen design, a "hard drive" that's microscopic in comparison to most, and much RAM. Still, the laptop still performs admirably - or at least well enough - for most usage.

Unfortunately, unless you happen to be a top-notch software developer, or were willing to pay twice the cost of the laptop to participate in the frustratingly opaque and slow Give-One-Get-One program of 2007 (G1G1 2008 starts up in November), you just simply couldn't get an XO - they were intentionally and adamantly not commercially available, despite the strong demand and buzz on their features. Naturally, markets abhor demand as nature abhors a vacuum, and existing niche company "netbooks" and stepped in, with bigger companies rolling out "mini-notes" soon thereafter. 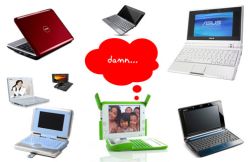 The scions of OLPC

The biggest legacy of the OLPC project may be to have created a market for more portable laptops, offering functionality that even the most powerful smartphones won't provide due mainly to their size, but focusing not on clock speed but travel-friendly features - the "4P" Computers featuring (long-lasting, low-wattage) Power, (high utility) Performance, (lightweight and rugged) Portability, and (low) Price. Lilliputing and Gizmodo have both been discussing this:
Nicholas Negroponte and his little laptop that could certainly sparked a revolution. Without the OLPC, it’s unlikely that we would have the Intel Classmate PC, the Asus Eee PC, or any of the dozens of cheap ultraportable consumer-oriented laptops that make life worth living.

The Economist also weighs in as well on the market that the OLPC opened up:
Hardly any models costing $500 or less were available when the XO burst onto the scene, but now there is a wide selection of such machines, from familiar makers such as HP and Intel, and from relative newcomers such as Asus and Pioneer Computers. By raising the very possibility of a $100 laptop, the XO presented the industry with a challenge. [...] All of these new machines are being aimed at consumers in the rich world, who like the idea of a computer that can be taken anywhere, as well as being sold for educational use in poor countries. The $100 laptop has been a success—just not, so far, in the way its makers intended.

With this vibrant new 4P laptop market, why do we even need the OLPC Foundation anymore? The Economist hints at the exact problem - the new 4P laptops are consumer-focused. Lacking is the attention to developing-world situations and the ruggedness, ease of repair, long lifespan and low cost those require. This is the second trap of talking about the technology itself. Not only is the project confused by the lack of distinction between being an education project, but by talking tech (like, admittedly, this post has done itself), you start down the path of commercial laptops, and the market dynamics of dealing with customers easily swayed by larger numbers (faster processors, bigger hard drives, more RAM, bigger screens...), and are less interested in accepting the trade-offs that make the laptop useful outside of industrialized parts of the world.

I posit that there remains a niche -- but still significant -- consumer market for the XO, more or less as-is, which could bolster the goals of the project by providing a larger community of developers, content creators and engaged users. The next segment delves into the missteps of the original and current distribution plans, and suggests revisiting the XO "deployment" strategy.

The XO Files: I Want To Believe