At the IADB seminar on ICT in the classroom, I asked Nicholas Negroponte why not sell the XO laptop -- at or near cost -- to anyone who wanted one? This gets beyond the hassle of having to convince bureaucrats of the value of the laptop without running pilot programs and delaying the eventual adoption. It (hopefully) creates some side markets in support, software development for non-educational uses of the laptop like rural healthcare, and could enable educational uses without going through the schools themselves, even.

Granted, there are some concerns. OLPC has thus far maintained a clarity of focus by working towards their mission of universal access, rather than having to worry (like Intel and Microsoft) about capturing an emerging market. Working at the ministry level potentially could reduce the transaction costs of each "deal," but more importantly, it guarantees some level of equitable distribution of the laptops, ensuring not just those with money will get access.

And this equity is important - for a education project within a school; you have to have all the students with laptops, or you by definition don't have a 1:1 program and you don't have a good shared computing setup either. Lack of computer saturation also opens it up to higher risk for theft.

Today's IADB event, Reinventing the Classroom, brought together thought-leaders, practitioners and government officials to discuss the role of technology in education in Latin America. In sum, it was a lot of preaching to the choir. This particular choir, however, hailed from many different churches, temples, cathedrals, and bazaars.

Everyone present believed in the importance of technology in education, but there was enough differences in opinion and methodologies to keep it interesting. It ranged from presentations on real-world experiences of projects in Portugal using a variation of the Intel Classmate to projects in Brazil and Argentina to the amazing Plan CEIBAL of Uruguay, using the OLPC XO. Presenters extolled the virtues of free and open source software as well as the familiar Windows XP.

By the end of the day-long seminar, I felt an odd mix of hope and despair. 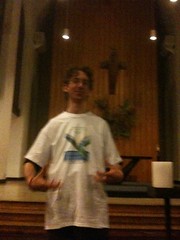 Next Thursday at the IADB is a huge event delving into the role of ICTs in the classroom, with heavy-hitters including Nicholas Negroponte of OLPC, Tabaré Vázquez, the Uruguayan President (no doubt discussing CEIBAL), and Mike Trucano of InfoDev, who has been spearheading a cool-headed data-driven look at ICTs -- See the full schedule and RSVP at http://events.iadb.org/calendar/eventDetail.aspx?lang=En&id=1444

CEIBAL (Conectividad Educativa de Informática Básica para el Aprendizaje en Línea) is a laptop program for public schools in Uruguay, and one of the largest and most active OLPC deployments.

I'll be there asking annoying questions about total costs for ICTs versus teacher salaries, problems with software licensing costs, and the importance of enabling technology, and taking notes on my cute little OLPC XO laptop.

And no, I don't see that being incongruous.

Update: Hello readers from Alanna's post on the OLPC at UNDispatch - You should check my original article on the OLPC TCO - written back in 2006 - over at OLPCNews.com.

If you poke around enough on the Laptop.org wiki, you find a few interesting corners. Linked from their work in creating a training and reference document for OLPCCorps, a link to an Excel spreadsheet to calculate OLPC-specific costs for a deployment, which has been created and maintained by OLPC's John Watlington

This is my response to the current EduTech Debate on the role of mobiles Vs. computers in education. Join the conversation and disagree with me!

I'm sure I sound like a broken record by this point; but there are roles for both mobiles and computers (be it 1:1 computing as with the OLPC, or 1-computer classrooms, or simply computer labs). Mobiles have high penetration rates (but how young? elementary school?) but limited capabilities beyond 1:1 or expensive 1:many communication. Computers are much more fragile and require more infrastucture, but have such a wealth of educational software and information (especially if you add in the Internet).

Neither are silver bullets to heal a failing education system, but both could play a role in extending education (call-backs to listen in to class for rural youth unable to attend school regularly?) if implemented with a reasonable and maintainable budget and good integration into the existing education processes. 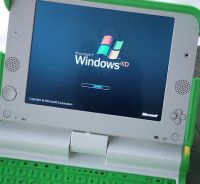 With a surprising lack of fanfare, OLPCNews recently revealed that Sugar is beating out Windows XP in XO deployments:

Apparently the conversations are going pretty much as many of us had expected: Initially country representatives inquire if Windows XP runs on the XO laptop. That doesn't really come as a surprise - for many people Windows is the definition of a computer. However, upon further investigation every country decided to stick to Sugar.

It's hardly a surprise, based on the wretched state of XP on the XO for educational purposes.

The surprising part is that after thousands of people screaming (including myself) about XP on the XO, the news that everyone is choosing Sugar went almost unnoticed.

This is a very good, if somewhat Pyrrhic, victory - there was a lot of time and effort lost to get XP to run, and a lot of bad blood created.

Long-term, however, the fact that head-to-head, Sugar is winning installations after review by education ministries is fantastic:

-It's an important mindshare victory for open source, especially at the operating system level (on the computing side) and at the ministry-decision-makers level on the policy side. This win will put downstream decisions on software on a more level playing field (hopefully?) 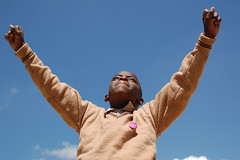 I recently saw Ken Banks present at a local speaker series run by IREX. He gave an updated version of this presentation from POPTech, on the power of mobile phones in citizen empowerment, NGO communication, and a host of other amazing stories of using the available, appropriate technology in remote and rural locations which are often off-grid and without Internet access. By attaching a computer (Linux, Mac, or Windows) to a cell phone with a data cable and installing his (free, open source) software, FrontlineSMS, that computer is turned into a messaging hub; sending and receiving text messages via the cell phone to hundreds of contacts.

That's pretty amazing. Three reasonably available pieces of hardware and you have a tool to send alert messages out, receive election monitoring information through, or communicate with field medical workers to coordinate and track supplies and treatment information. Or track corruption. Or report human rights violations. Or share news and tips in places where the media is not independent, as one of the FrontlineSMS success stories shows: